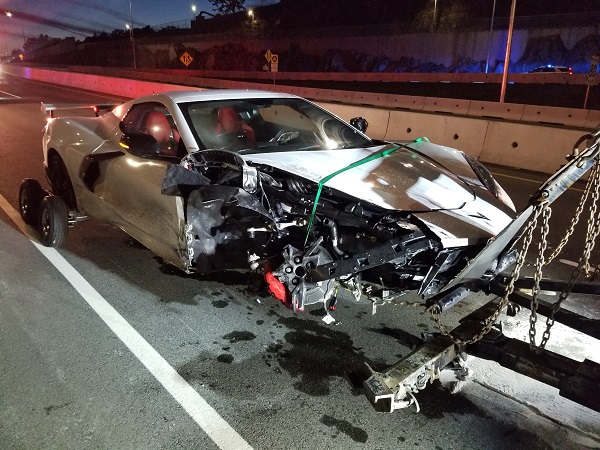 Police believe that a vehicle reported as a possible impaired driver was involved in a collision minutes later.

On June 18th, 2021, West Shore RCMP received a report of a possible impaired driver. The vehicle was reported as a white Corvette, being operated in a manner described as "stunting", while travelling south on the Trans Canada Highway. Minutes later, a second report was received from the public, stating a white Corvette had been in a motor vehicle collision on the Helmcken Road on ramp in View Royal BC.

The Corvette left the site of the collision and was located by West Shore front line officers at the McKenzie Avenue exchange. The driver, a 55 year old Saanich resident, was arrested at the scene and is now under investigation for Failure to Remain at the Scene of an Accident and Impaired Operation of a Motor Vehicle.

In light of the speeds reported by witnesses, we are relieved that no one was seriously hurt or killed in this collision, says Cst Meighan Massey, of the West Shore RCMP, This collision is a stark reminder of the increased risks on our roads with the onset of summer activity. With the lifting of restrictions comes the increase in local travel and socialization. Please remember to arrange for a safe ride home if you are going to be out drinking.

Investigators are looking for any dashcam or cell phone footage of the events leading up to the collision, the collision itself or events after. If you witnessed any part of this incident, or have footage, please contact the West Shore RCMP at (250)474-2264.

If you have any information to provide and wish to remain anonymous, please contact Greater Victoria Crime Stoppers at 1-888-TIPS (8477).