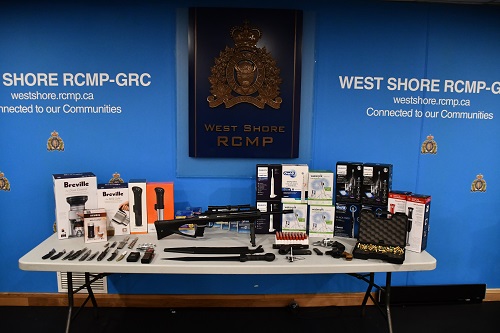 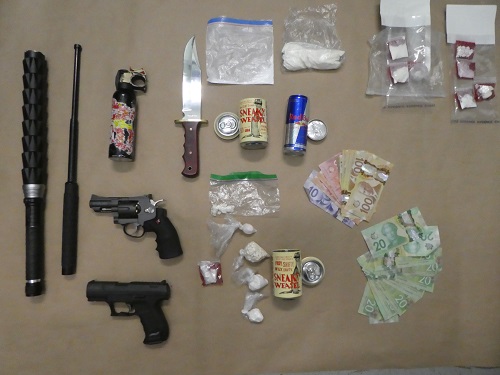 A suspicious vehicle, a shoplifter and an outstanding arrest warrant are often perceived as ‘routine’ calls in the West Shore, yet these three netted far more than expected.

On Wednesday night, May 18, 2021, the West Shore RCMP Drug and Organized Crime Unit was on duty on an unrelated matter when they observed a woman appearing to be dealing cannabis from the trunk of her car while in a commercial parking lot. Unfortunately, while possessing and selling cannabis is now legal, doing so out of your trunk is not. The woman, a 34 year old Langford resident was arrested and officers seized over $15,000 in cannabis. Charges under the Cannabis Act are being recommended.

On May 19, 2021 a suspicious vehicle was reported at Goldstream Avenue and Wenger Terrance, Langford. The driver had fled on a skateboard and the vehicle was damaged and looked as if it had been driven on its rims. Further investigation led to the identification of a 29 year old Victoria man, known to have an outstanding warrant for his arrest. On May 20, 2021, the West Shore RCMP Crime Reduction Unit located and arrested the man, subsequently seizing 34.57 grams of suspected cocaine, 33.68 grams of suspected crack cocaine and 11.69 grams of suspected methamphetamine. Officers also seized bear spray, imitation firearms and over $1000 in Canadian currency. The West Shore RCMP Crime Reduction Unit are recommending further drug charges against the man.

An alleged prolific shoplifter was reported on May 21, 2021 by staff at the Colwood Corners London Drugs, located at 1907 Sooke Rd, Colwood, BC. Surveillance footage showed a man stealing a Breville Café steamer and a Kitchen Aid hand mixer. The responding officer viewed the surveillance footage and immediately recognized the man as a local resident, well known to police. Front line officers conducted a search warrant where a large amount of stolen property was located, in addition to a large cache of weapons. Police seized over a dozen knives, including prohibited styles, multiple sets of brass knuckles and 2 prohibited Conductive Energy Weapons. Three starter pistols, one assault style airsoft rifle, a sword and boxes of ammunition were also seized. Officers also recovered thousands of dollars in stolen property. The suspect was arrested and held for court. He is now facing additional charges of Breach of Probation x 10, Possession of a Prohibited Weapon x 6 and Possession of Stolen Property under $5000.

There is a saying in policing that no call is ‘routine’, said Cst. Meighan Massey, the West Shore RCMP Media Relations Officer, This kind of week shows exactly why that is. Thorough investigations and hard work have yielded seizures that impact the community directly, removing unsafe cannabis, illicit drugs and prohibited weapons from our streets.

Photos are attached from the shoplifting investigation and suspicious vehicle seizures respectively.